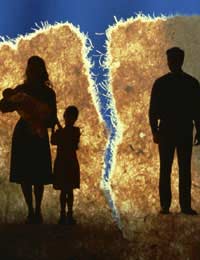 The Family Law Act was introduced in order to revolutionise the divorce process in this country. Amongst other things, it tried to abolish the notion of ‘fault’ based divorces, which are brought on grounds such as unreasonable behaviour and adultery in order to rush a divorce through the courts. This part of the Act was scrapped by the Government in 2001, when it was decided that this would make divorce too easy for couples experiencing marital difficulties. The law also promoted the use of mediation in divorce, in order to reduce the number of cases that ended up in the family court rather than being settled between the parties.

One of the most significant elements of this act relates to Part 4 of the Act. There are two ‘Orders’ that were created to assist people having difficulties in their relationships. These are the ‘Non-Molestation Order’, which stops another person from harming you or a child in your family, and the ‘Occupation Order’, which determines who should remain in the family home, and who should leave.

There are limitations on the people against whom you can take out these types of order. You can use them against your spouse, your partner with whom you have cohabited (with some exceptions), a relative, your fiancé (but you will need to provide some proof that you are engaged, such as a ring, or testimony from someone who came to your engagement party), or the other parent of your child. A person under the age of 18 can apply for a non-molestation order, but will need an adult to help them (called a ‘next friend’). Anyone under the age of 16 will need the permission of a high court judge in order to apply for an order.

How To Apply For Your Own Order

You can apply for an order at any county court that has the ability to hear divorce or family proceedings. You can also use a magistrates court, if they have the power to hear family cases. You may need to pay a fee to make your application, but if you are receiving certain benefits this may be waived.

Apart from your own personal details, you will need to provide a certain amount of information to the court in order to apply for an order:

You will need three copies of form FL401, or four copies if you are applying for an Occupation Order. Then, on form N285 you will need to set out the why you need the order and what has happened to make you want to take out this order. If you think that your means are too low so that you should be entitled to be exempt from the fee, you will need to use form EX160. Once you have filled these in, you should take them to the court with the fee and the appropriate evidence. For example, if you are in receipt of Income Support you should provide evidence so that you do not have to pay a court fee.

The court will ensure that the forms are filled out correctly and then give you a form FL402, or notice of proceedings. This form will tell you when your appointment with the judge is. You will then need to serve notice of the proceedings on the other party personally (i.e. they must be actually handed the document), and may wish to ask the court or a bailiff to do this on your behalf.

The application will go before a judge, normally in a private room rather than a courtroom. The judge may either:
Next Page

Child Support and the Children Act 1989

What Are Parents' Rights on Separation?
Share Your Story, Join the Discussion or Seek Advice..
[Add a Comment]
Hi Iv been separated from my 2 children's father for a year and a half I was forced to get him removed as he was a mentally abusing me and spent no time with the children , I eventually agreed to let him take them out once aweek but wasn't happy about it iv tryed to be civil for there sake but he's controling my children by making calls to my 14yr old every evening and making arrangements with out even consulting with me iv tryed to avoid a court offer but he causing me a lot of axciety doing this I just need some help and advice please.
jenny - 2-Oct-20 @ 12:35 PM
If a child goes to live with the father paying child support, can he stop paying child support to the mother who no longer has the child following the child being moved by social services?
Pj - 10-Apr-19 @ 2:10 AM
@samson - you may find some information in our partner article The Different Types of Contact Orders, link here. I hope this helps.
ChildSupportLaws - 2-Mar-15 @ 2:17 PM
where can I get a clear legal definition to the following supervised contact supported contact and also a term im seeing a lot used by courts in parenting orders supervised/supported contact where friends and family members act as supervisors.
samson - 27-Feb-15 @ 9:34 AM
My ex wife breached a court order for the second time,I have my son every Saturday last week I had to get the police to go to her flat to get my son and this Saturday I went to pick him up but she refused again. What does the law says for her breaching the court order
Abel Aoun - 18-Oct-14 @ 11:20 AM
my daughter has joint custody of her daughter age 6 while in my house she got a bruse when she fell on lego bricks so she went to her dads her dad asked her how she got it she said her mum had smacked her that day and she did because her and her sister where in the top room of a 3 story building chucking stuff from a window which was screwed closed but they managed to open and the work man came told my daughter what was going on so she paniced smacked them both on the legs as you do but it was not the bruse that happened so dad finding this out got social worker and police involed now he wont let my daughter see her child no one has contacted me or my wife to tell them how she got the bruse and he is now calling the shotsnot letting the child home or even suppervisd visits i myself think this is wrong what can we do
waldo - 8-Oct-14 @ 4:16 AM
Title:
(never shown)
Firstname:
(never shown)
Surname:
(never shown)
Email:
(never shown)
Nickname:
(shown)
Comment:
Validate: